What is QEEG brain mapping?

For you to understand what a QEEG is, we have to start by describing what an EEG is. An electro-encephalogram (EEG) is a test that measures the electrical activity in the brain, using small metal discs (electrodes glued to the head).

Specifically, EEG activity is often measured with a cap on the head that has 19 (24) electrodes. The electrodes are distributed throughout the cap so that a large area of ​​the brain is covered. 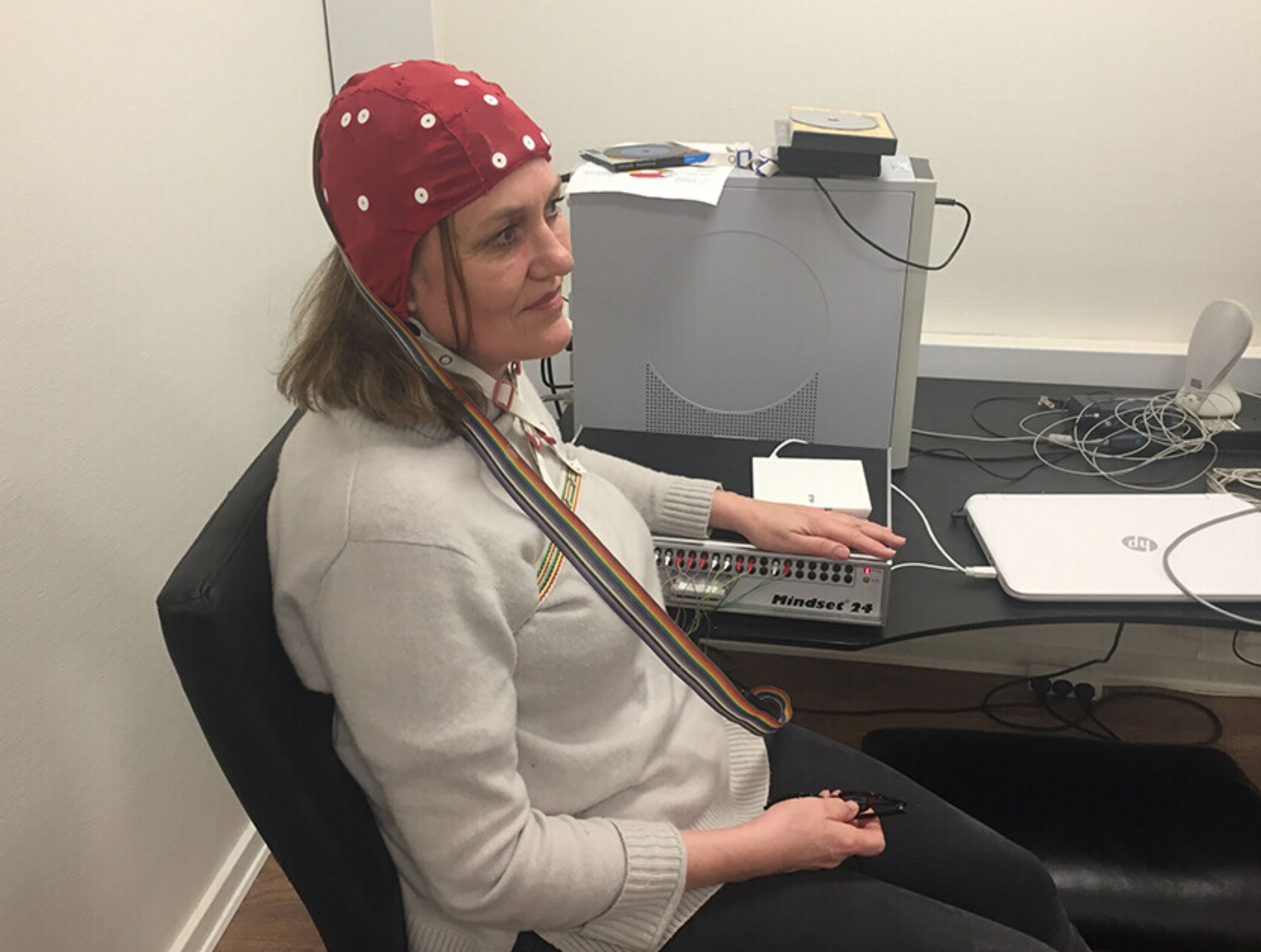 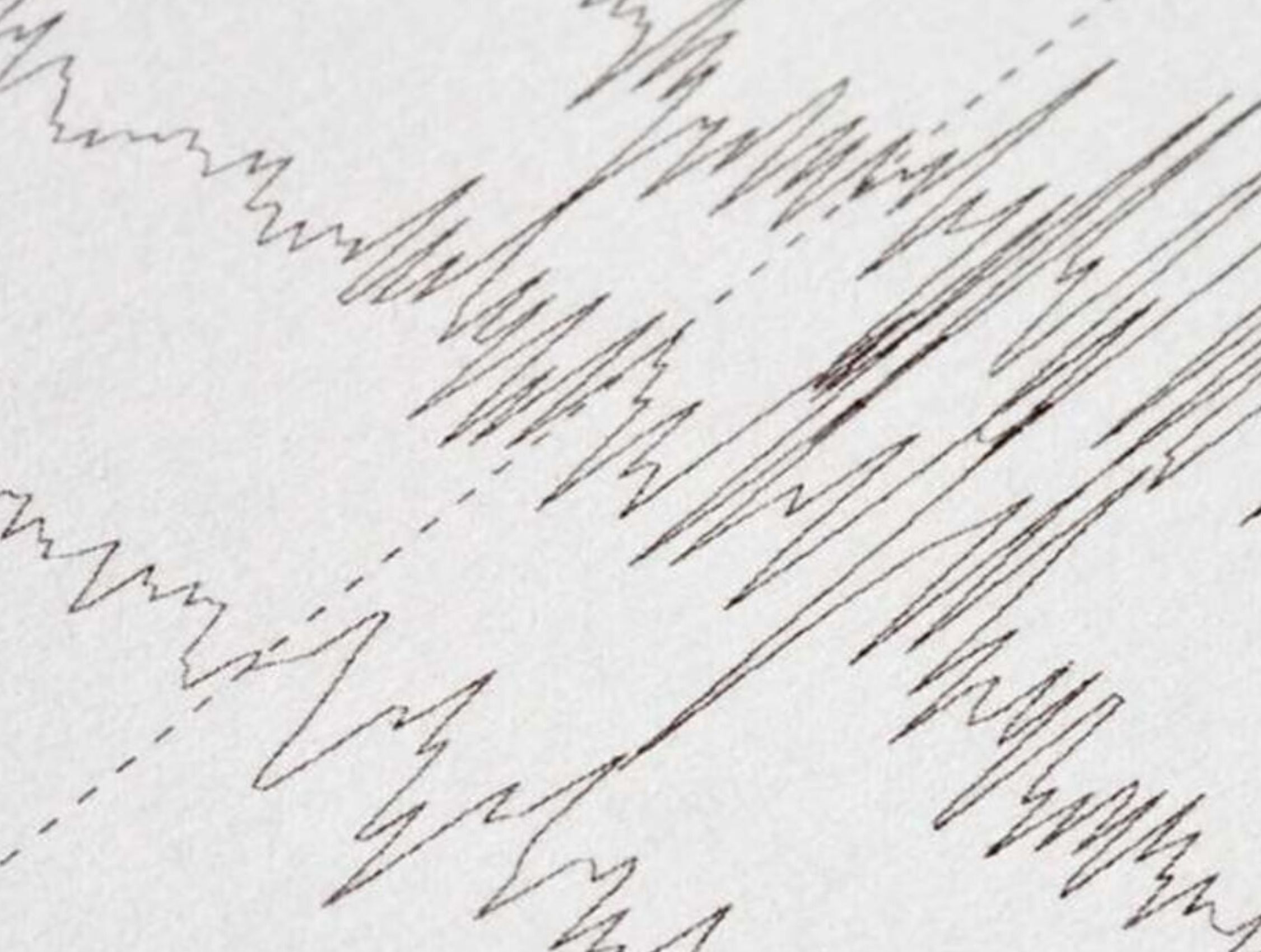 An EEG measures different types of brain waves. The result of an EEG is a printout with a series of curves which look like a pattern of zigzags

A QEEG calculates how much electricity comes out of the different brain waves. The brain waves are divided into 6 types:

All of these brainwave types “belong” to their respective emotional response to situations. If a person is met by a lion in a panic situation, they will usually make a lot of high beta waves. During focus, normally functioning people make beta waves. If instead, one produces theta waves in situations that require concentration and mental activity, it is a sign that the brain is not functioning properly. That’s how it is in general. It is, of course, the case that the brain uses different areas for different functions. Therefore, an EEG is measured in 19 different places for brain mapping.

Similarly, it is e.g. not appropriate if one produces beta activity when falling asleep. At this point it is better to have the brain in alpha activity, which is the idle(inactive) activity of the brain, and gradually fall into theta and delta activity, so that you eventually fall asleep. At the transition to deep sleep it is almost only delta waves that are being made.

How is QEEG brain mapping done?

During EEG measurement with the cap on, a software program captures the electricity from each of the 19 electrodes.

What is a Brain map?

A brain map is a kind of map of the brain with different color indications for the amount of activity. It is the result of a QEEG measurement.

The Danish Institute for Brain Training uses a full two databases to ensure that your activity is kept up to normal: the Neuroguide database and the Loreta database.

Using the Neuroguide database, your local brain activities are compared with an age-based database that shows which brainwave types are normal, too high or too low under each of the 19 electrodes. If a person’s activity in front part of the brain after a concussion is too slow, this can be identified.

In the Loreta database, the EEG activity is transformed into scan-like images, by “brain mapping”. In this way the dysfunctional areas of the brain are revealed. For example, whether the excessive delta wave activity over the left temporal lobe originates from the amygdala. 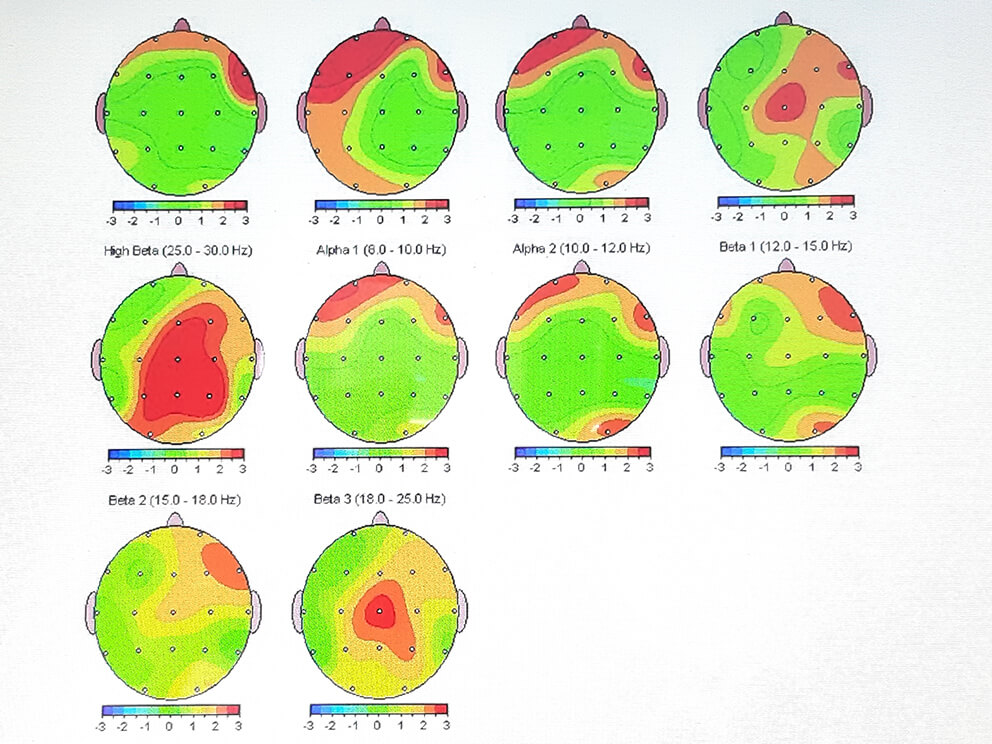 QEEG is used by physicians to make diagnoses

In hospitals and outpatient neurology departments, an EEG is used to detect neurological disorders. It is often used to diagnose epilepsy and sleep disorders. In the United States, QEEG is also used in psychiatry and to see if there is a likelihood of minor brain damage or of ADHD.

QEEG, when compared to the two databases, has certain advantages over an MRI scan or a CT scan. Minor and more diffuse damage, such as that seen in a concussion, cannot be seen by these standard scans CT/MR. On the other hand, they will be detected by functional measurements.

For brain diagnosis if SPECT scan is not possible

An QEEG brain mapping is a functional measurement where you are measured during function, i.e. while doing something. If you need to know your brain function and cannot perform a functional SPECT brain activity scan, QEEG is a cheaper but less precise alternative for examining brain function.

A QEEG BrainMap made on the basis of the Neuroguide database and the Loretta database provides much more accurate and effective brain training. This is the reason why you pay more for brain training at the Department of Brain Training.

This is how you avoid incorrect training and overstimulation. The cheaper places do not do this. This, and the scientific background from Roskilde University, are the reasons why REbrain Clinic has chosen the Department of Brain Training as its partner.

This website uses cookies to improve your experience while you navigate through the website. Out of these cookies, the cookies that are categorized as necessary are stored on your browser as they are essential for the working of basic functionalities of the website. We also use third-party cookies that help us analyze and understand how you use this website. These cookies will be stored in your browser only with your consent. You also have the option to opt-out of these cookies. But opting out of some of these cookies may have an effect on your browsing experience.
Necessary Always Enabled
Necessary cookies are absolutely essential for the website to function properly. This category only includes cookies that ensures basic functionalities and security features of the website. These cookies do not store any personal information.
Non-necessary
Any cookies that may not be particularly necessary for the website to function and is used specifically to collect user personal data via analytics, ads, other embedded contents are termed as non-necessary cookies. It is mandatory to procure user consent prior to running these cookies on your website.
SAVE & ACCEPT
Go to Top